Progress in the East

Progress in the East and the neighbouring mural Once Upon a Time in the East together form a 180-degree illustration—a unique concept! The combined murals take up 4,644 square feet. Progress in the East is in the same spirit as its counterpart, portraying neighbourhood life in the city’s eastern district, but this time in 1898. Sherbrooke is depicted as a manufacturing city opening up to new technologies including electricity, home telephones, tramways, cars, airplanes and the daily press. Alongside these technologies is a scene of rural bargaining for farm-fresh products. Such bargaining was still commonplace at the time. 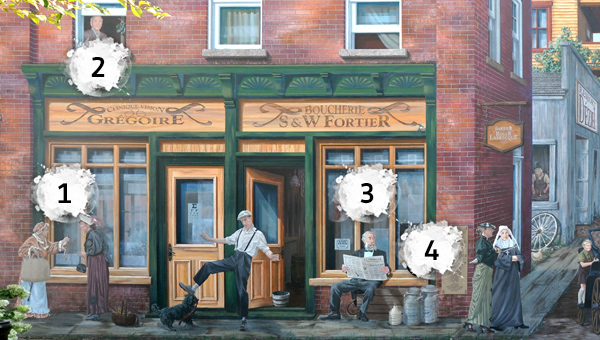 1
Bargaining
Bargaining directly with farmers was still common at the turn of the 20th century.
2
Gérard « Tarzan » Beaudette
(1926-2003)
Fought and won many boxing matches in Canada and even in the United States. Outside of professional boxing, he also worked as a cook.
3
Stanislas Fortier
(1855-1927)
First French-Canadian mayor, elected in 1898 in accordance with the referendum procedure for municipal elections, which meant alternating between English-speaking and French-speaking mayors.
4
Pitcher on the Ground
W. M. Murray & Co. Wholesale & Retail, Groceries, Wines, & Liquors belonged to William M. Murray, who became councillor, then mayor as of 1887. 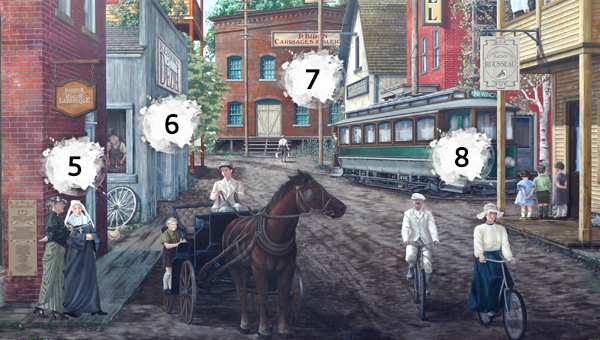 5
Mère Gertrude of the F.C.S.C.J.
Headmistress Mère Gertrude was the procurator for the Daughters of the Charity of the Sacred Heart in America. She was the person most directly involved in leading new local communities.
6
Ressort Déziel
The Déziels have been established in Sherbrooke’s eastern district for 100 years. They include councillors Ovila (1942–1952) and Gérard, who was also MP (1973–1976). The Déziels run the Eastern Townships’ oldest welding company.
7
Pamphile Biron & Sons
Manufacturer of horse-drawn coaches, carts and sleds from 1857–1920. Mr. Pamphile Biron (1838–1917) spent twelve years in Manchester, New Hampshire, learning the trade of wagon and wheel production.
8
Tramway
With the advent of hydroelectricity in Sherbrooke, the tramway network was introduced in 1896, and the Sherbrooke Street Railway Company began operations in 1897. To meet the city’s public transportation demands, in 1928, the company acquired two buses to supplement the tramway routes that were unable to service the outer parts of the city. The power to the tramway was shut down on December 31st, 1931, bringing an end to this mode of transportation in Sherbrooke. 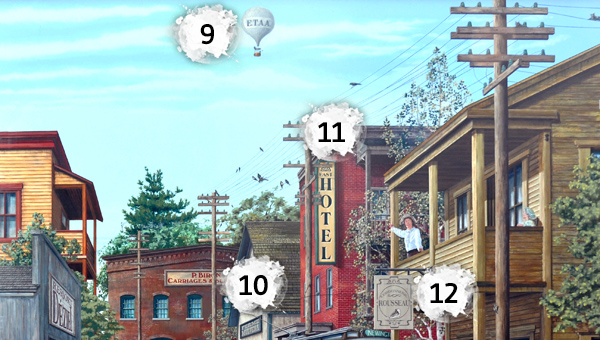 9
E.T.A.A.
The Eastern Townships Agricultural Association was founded in 1884. In 1885, it purchased a 35-acre lot on the Terrill property.

For over 100 years, the association organized one of the largest annual fairs, along with farm contests and industrial expositions. The association strongly emphasized recreational activities, and the organizers were always on the lookout for sensational shows.
10
Ferme Mulvena
In 1896, two farms were located on the road to Lennoxville: the Mulvena and Robertson farm and, at the other end of the neighbourhood, the Samuel Terrill family farm. The Mulvenas and Terrills are descendants of the pioneering explorers of Ascot Township.
11
East Hotel Sherbrooke
Address: 1 and 3 Bridge St. (King East), at the corner of St-François North. When it opened in 1873, the building was named the Hôtel du peuple and belonged to Fred Allard. The building was demolished in 1971. An inn and a tavern were located on this street corner for an entire century.
12
Cordonnier Rousseau
Property of François-Xavier Rousseau, who opened his cobbler’s business here (24 Bridge St., today King St. East) in 1892. Mr. Rousseau was a cobbler in this neighbourhood for over 25 years. 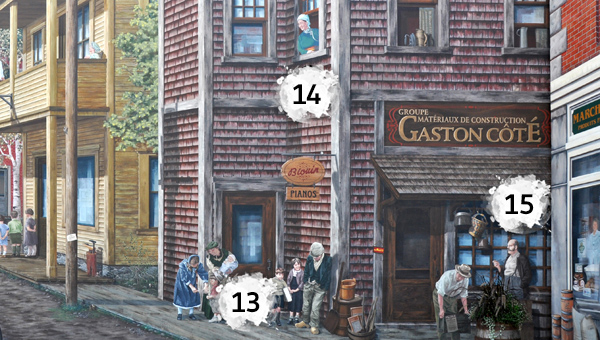 13
Scandinavian Family
At the corner of the building is a newly arrived Scandinavian family. The father is a little worried about his children and their adjustment to the new country.
14
Dry Cleaner and Laundromat
According to the Sherbrooke directory at the time, the Lee Kee family settled at 29, then 31 Bridge St. (now King St. East), near the mural. The family ran a laundromat from 1900–1905.
15
William Bullock Ives
Sherbrooke MP and conservative minister William Bullock Ives practised law in Sherbrooke from 1867–1890. He was very active, with many ties to the wood, pulp and paper industries.