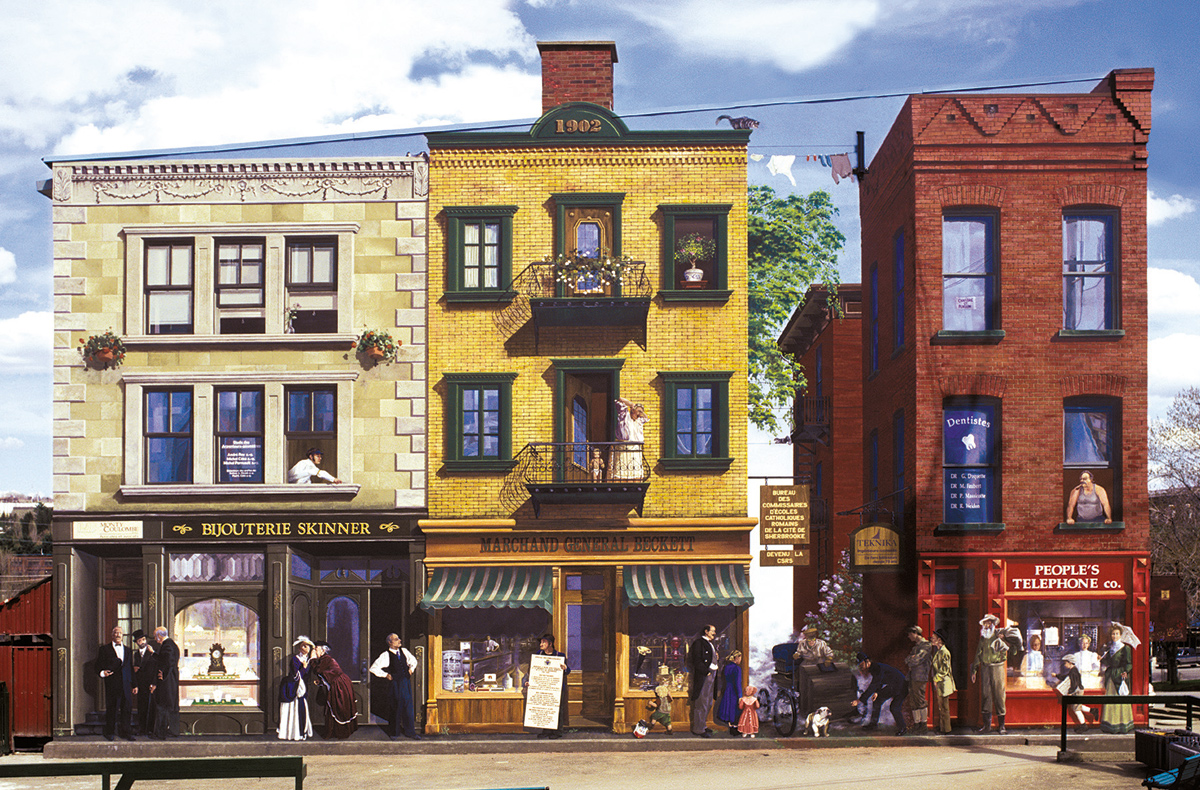 The “Sherbrooke Bicentennial Mural,” created during the festivities surrounding the 200th anniversary of the founding of Sherbrooke, was the first-ever mural by the M.U.R.I.R.S. organization.

It features an imaginary scene at the corner of Commercial and Factory Streets (today Dufferin and Frontenac) during a lovely afternoon on June 2nd, 1902. The characters—businesspeople, politicians and ordinary folks—are seen mingling as they go about their everyday business. 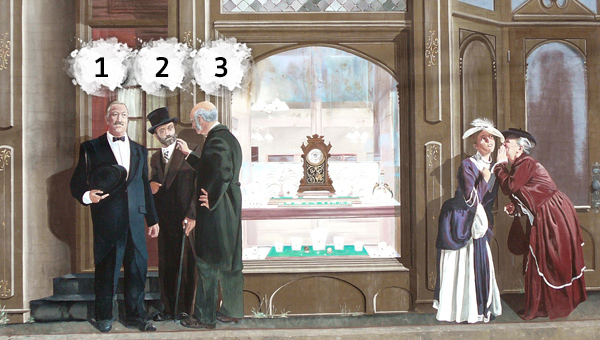 1
Frank McCrea
Frank McCrea, the pulp and paper baron and councillor for Sherbrooke’s northern neighbourhood, is seen discussing the merits of municipalizing hydroelectric power with Daniel McManamy and Richard Heneker.
2
Daniel McManamy
Irish businessman Daniel McManamy, discussing the merits of municipalizing hydroelectric power with Frank McCrea and Richard Heneker. Mr. McManamy would eventually prove that the Magog River should belong to public services since it was a navigable waterway—as the law stipulated during those times—by going down the river in his own boat.
3
Richard Heneker
Richard Heneker was Commissioner of the British American Land Company, which controlled the Magog River dams. He was also manager of the Eastern Townships Bank. 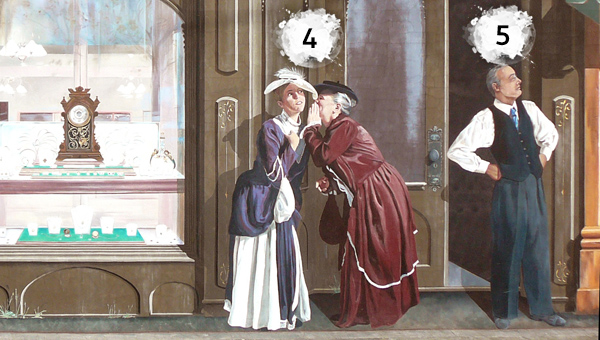 4
Rumours
One can only wonder: What local rumours might our two gossips be whispering about?
5
Carlos Skinner
When the French disembarked in what would become New France, the Saint-François River soon became viewed as a strategic route—a navigable highway—fated to play a key role in our region’s history and even beyond our borders.

Starting in 1690, during the war between France and England, Governor Frontenac gave François Hertel a guerilla mission to destroy the village of Salmon Falls, New Hampshire. On March 29th, 1690, Hertel, accompanied by a few militiamen and Abenaki warriors, travelled the Saint-François and then the Magog River, and burned the village down. Hertel’s mission was a success.

In 1708, the war between England and France resumed, and the Saint-François once more took on a strategic role. Ever faithful to his strategy of foraying into enemy territory, Governor Vaudreuil sent François Hertel’s son, Hertel de Rouville, on a new mission. Hertel took to the river to raid Haverhill, an English colony in Massachusetts, on the Merrimack. This raid, too, was successful.

These missions were not military exploits in themselves, but were strategically aimed at spreading terror in enemy territory. The inhabitants of the English colonies lived in constant fear of these raids, precisely because they lacked control of the river. The French and Abenaki warriors could strike at any point beyond the “Border.” 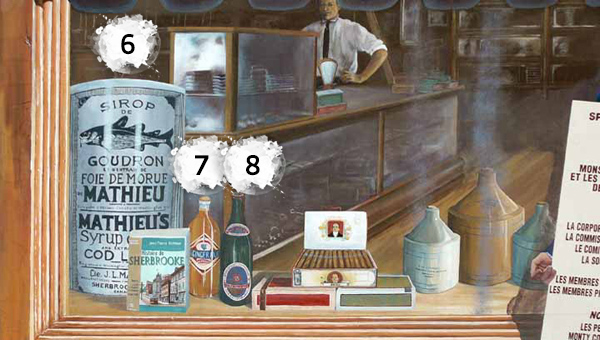 6
Mathieu’s Syrup
Mathieu’s Syrup, a concoction of tar and cod liver oil, was used to shake off the common cold, bronchitis and other respiratory ailments. Colonel Chevalier Mathieu’s syrup was made in Sherbrooke, and the company was one of the first to translate its bilingual labels.
7
Bull's Head Ginger Ale
This popular ginger soda was invented in 1896 by John Henry Bryant. Bryant’s wife suggested that he name the soda Bull’s Head after his stubbornness.
8
Silver Spring’s Beer
Silver Spring’s beer was brewed by Mr. Bryant on the neighbouring street, Abénaquis Street. 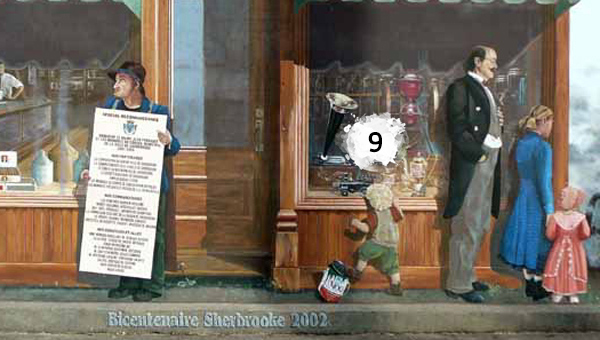 9
Toddler
This toddler, with his nose pressed up against the shop window, is dreaming of one day becoming a train conductor like his father, who works for Boston and Maine Railroad. In the meantime, he would be content to get his hands on this lovely toy, if only he could afford it. 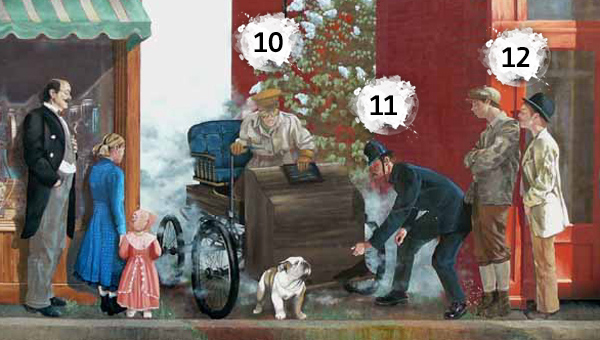 10
Mr. Georges Foote Foss
Mr. Georges Foote Foss at the wheel of his Fossmobile, the first gasoline-powered car in Canada. We might be witnessing the city’s first-ever traffic jam!
11
Robert Davidson
Policeman Robert Davidson was fire chief during the last two decades of the 19th century. Here he is seen grappling with an English bulldog—whose irritated owner is looking on from his balcony—to try and clear the road.
12
Young Workers
These young workers have arrived from the Smith & Elkins stove manufacturing plant, on the other side of the bridge. 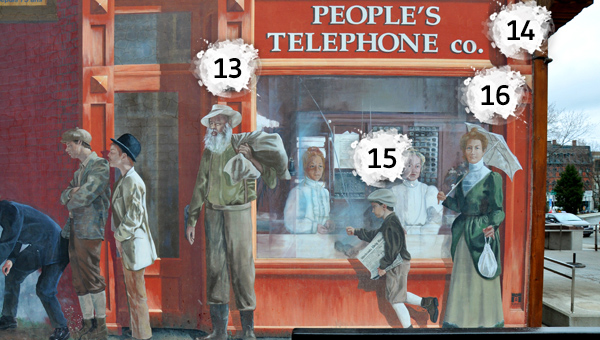 13
Farmer
Here we chance upon Son Père, a farmer who came to town to barter his goods at the general store.
14
People's Telephone Co.
The People’s Telephone Co., active starting in 1896, offered one of the first jobs for women with the advent of new technologies.
15
Paperboy
This young paperboy is rushing about to deliver the Sherbrooke Daily Record, the only remaining newspaper after the Francophone Le Pionnier relocated to Montreal. This edition of the paper announces the end of the Boer War, and relates Sherbrooke’s lacrosse victory at the interprovincial tournament.
16
Alice E. Stewart
Mrs. Alice E. Stewart, superintendent of the city’s Anglophone hospital or “Sherbrooke Hospital,” in 1902.