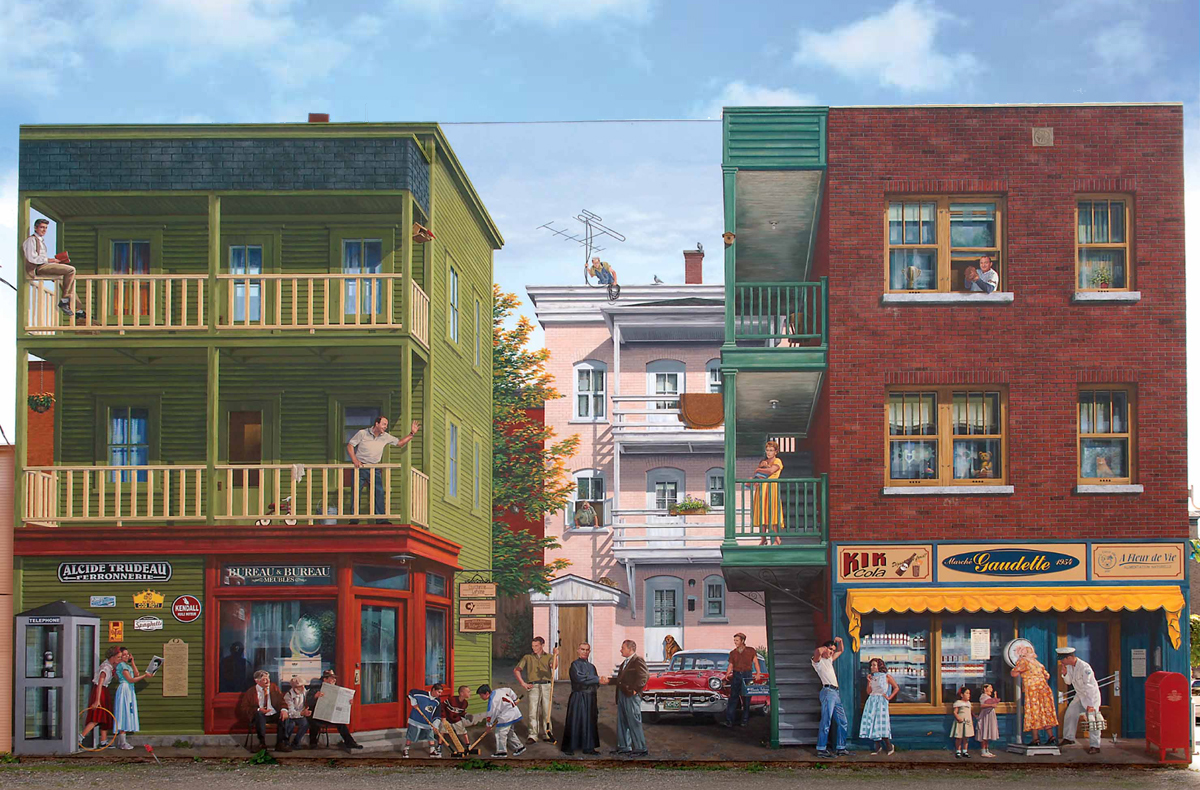 The mural The Good Years is a tribute to Sherbrooke’s southwestern neighbourhood, nicknamed “Petit-Canada.” The name can be traced back to the end of the 19th century and referred to the working-class district. The neighbourhood, imagined here on September 27th, 1957, consisted mostly of French-Canadian workers and their large post-war (baby-boom) families. The crowding and lack of housing in this area led to the creation of alleys and the construction of backyards and square houses with large galleries, resulting in convivial neighbourhoods à la Fridolin.

Sherbrooke was becoming increasingly active with its burgeoning university and the arrival of new technologies such as primitive television sets, which allowed people to observe the outside world from the comfort of their own homes. In this scene, a backdrop of Elvis Presley music, Chevrolet Bel-Air cars, and the Sainte Flanelle sets the stage for the appearance of a few local personalities and familiar merchants. Location: 364 Alexandre St., Sherbrooke 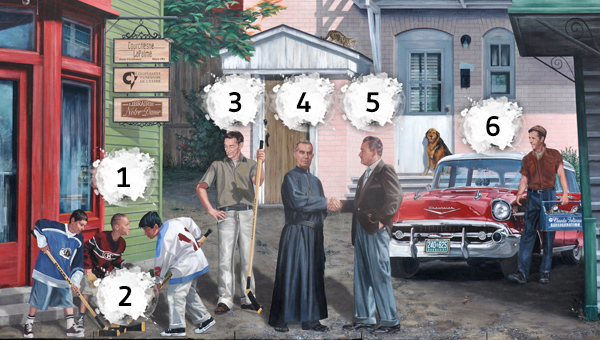 1
Young Hockey Players
These young hockey players dream of being among the ranks of the”Sainte Flanelle” or joining Sherbrooke’s new team,”Les Castors,” with the invaluable help of their improvised coach, Gerry Plamondon.
2
Sherwood Drolet
Property of Léo P. Drolet, founding president. The company, founded at the end of the 1940s, became a world leader in hockey stick manufacturing.

The Groupe Drolet included brothers Michel and Denis Drolet along with their father Léopold. Sherwood remained the property of Léopold Drolet in the 1960s. After a fire, Drolet had to sell the company to ensure its continuation. Sherwood was acquired by Figgie International in 1969.
3
Gerry «Eagle Eye» Plamondon
Born in Sherbrooke (Saint-Pierre St.) on January 5th, 1924. Between 1945 and 1946, toward the end of the season, Gerry “Eagle Eye” Plamondon left the Valleyfield Braves and joined the Canadiens, replacing Toe Blake, who was seriously injured at the time.

He took part in the playoffs and won the Stanley Cup. He continued playing until 1951.
4
Frère Théode
Born in Weedon on September 1st, 1897, Frère (brother) Théode, birth name Maxime Lafond, entered the Institut des Frères du Sacré-Coeur in 1913 and began teaching in 1915.

He dedicated over 40 years of his religious life to teaching to young people. He was one of the precursors of the Fondation de l’Université de Sherbrooke.
5
Armand Nadeau
Born on October 16th, 1910 in Saint-Agapit (county of Lotbinière, Quebec) to J.-Albert Nadeau, a Montreal industrialist, and Valéria Fradet. He was actively involved in politics and ran in provincial and municipal elections, becoming a Sherbrooke municipal councillor (1948–1950).He was elected mayor of Sherbrooke on April 26th, 1955 and held the office for 15 consecutive years, until January 30th, 1970.
6
Chevrolet Bélair 1957
Automobiles were beginning to be affordable to the middle class and some upper portions of the working class. In 1954, 14,000 motor vehicles were registered in Sherbrooke and in 1960, 60% of households had their own automobile. Gasoline sales became an important staple of the retail market, with 70 gas stations.

The development of the automobile caused headaches for parking, especially in the heavily congested downtown area. This resulted in the expansion of the Webster parking lot and the addition of new parking areas in 1958 along with the installation of parking metres in 1954.

In 1953, Sherbrooke became the first city in Canada to use radar to identify speeding automobiles. 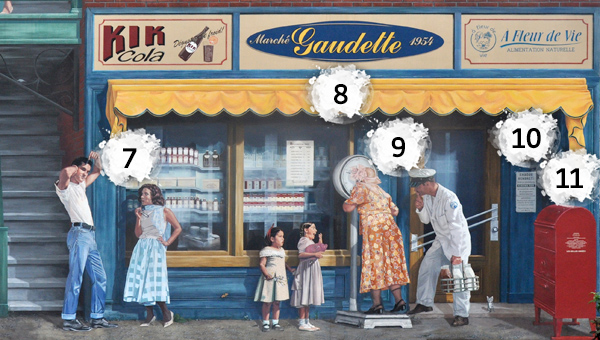 7
The Good Years
A young man running into a young lady, and seizing the opportunity to invite her out to the movies.
8
Marchés Gaudette
Marchés Gaudette is a local Sherbrooke business well established in the city’s social, economic, and cultural communities. The chain’s opening of a new store on King St. East in 1972 marked the beginning of an impressive expansion, primarily characterized by its association with Provigo.
9
S.P.M. (Sherbrooke Pure Milk)
Here’s the milkman, with one sneaky foot tipping the scale to convince a lady to try a brand new product: skimmed milk.

The Rex theatre policy was to show French-language films and films dubbed in French. The theatre was a prominent place of entertainment and was not always appreciated by the clergy; in fact, many films were censured. But some theatre managers did not always abide by clergy recommendations. Rex refused to cut out “indecent” sequences from films, which led the police to seize a particularly explosive film, Sensation hollandaise. The matter went to court and Cinéma Rex won the case, in spite of the protests of the authorities.
11
Mailbox
The year 1955 marked the inauguration of the new building on Couture St. (formerly Édouard St.) by Minister Robert Winters. The building housed postal, tax, border and RCMP services. Several buildings had to be taken down to build it. 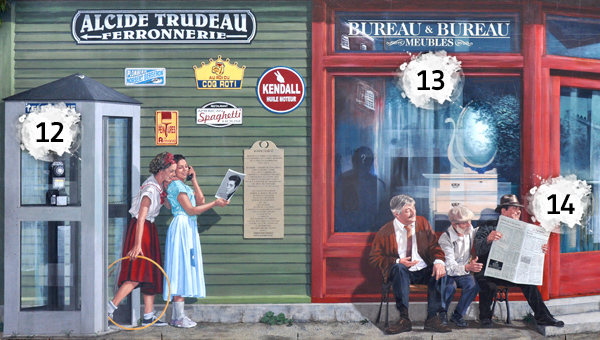 12
Telephone
In 1955, Bell boasted 20,000 devices in operation.
In 1960, telephones became accessible to 95% of all households.
13
Bureau & Bureau enr.
The local furniture store Bureau & Bureau was founded in April 1951 and has never stopped growing.
14
La Tribune
Circulation: 18,400 copies in 1950, 36,600 copies in 1960. Founder Jacob Nicol (1910) also owned two radio stations that were iconic of the region’s collective and cultural identity. Ownership of the newspaper was transferred to Paul Desruisseaux, paving the way for Sherbrooke’s very own TV station, CHLT-TV. 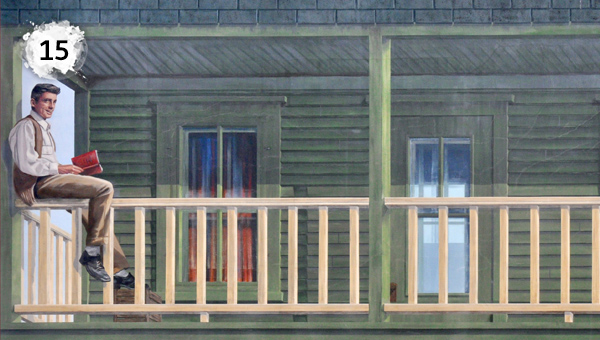 15
Jean Besré
Jean Besré was born in Sherbrooke (St-Louis St.) in 1939, and spent his childhood and teenage years in the city. He was an accomplished actor in Quebec theatre, television, and film. 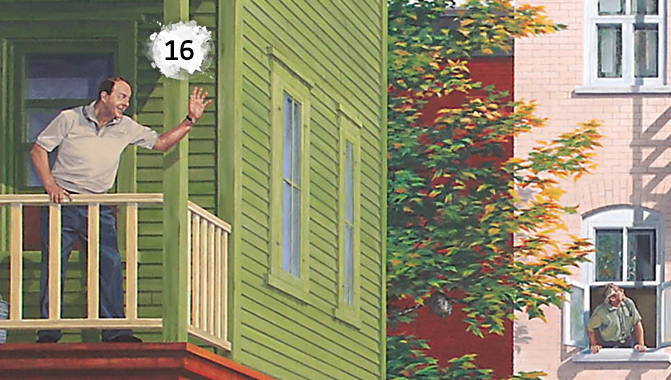 16
Friendly Neighbourhood
A neighbourhood resident busy cleaning his windows for the fall, and waving to his neighbour as in a Michel Tremblay play. 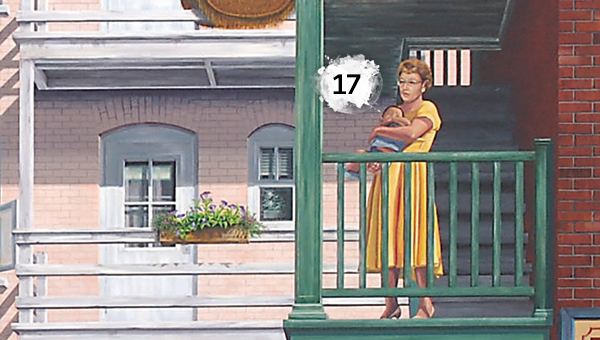 17
Tante Margot
Marguerite Morisset-Leclaire (1906–1997) dedicated her entire life to children. For five years in the early 1960s, as “Tante Margot,” she hosted a live one-hour children’s show on CHLT-TV. 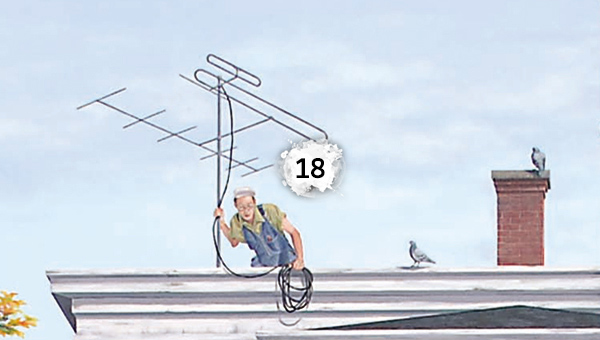 18
Television
On the roof of the building at the end of the alley is a TV antenna installer, asking the man with the TV set on the floor below if the picture is clear or still snowy. CHLT-TV: The TV station was inaugurated by Jacob Nicol, Paul Desruisseaux, Louis-Philippe Robidoux and the managers at La Tribune.

CHLT-TV was one of Canada’s first private stations, and put Sherbrooke on the map as an artistic and cultural centre. In June of 1955, an agreement was signed with Minister Johnny Bourque and an antenna was put up at the summit of Mount Orford. CHLT-TV (channel 7) was broadcast across a large swath of Quebec. The station antenna on Mount Orford was blessed by Mgr Cabana in 1956. It began broadcasting on August 12th, 1956. The show Soirée canadienne, created by host Louis Bilodeau in 1960, was unquestionably the most popular of the station’s programs. It was the first made-in-Quebec show to be broadcast in the United States. 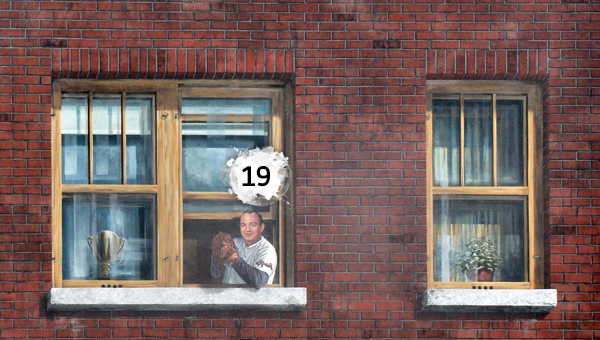 19
Yvon Ellyson
Yvon Ellyson was inducted into the Baseball Quebec Hall of Fame in 2001 for his years of devotion to the provincial league.

He was also a restaurant and hotel businessman, and the manager of the Louis Luncheonette restaurants so well known to Sherbrookers.