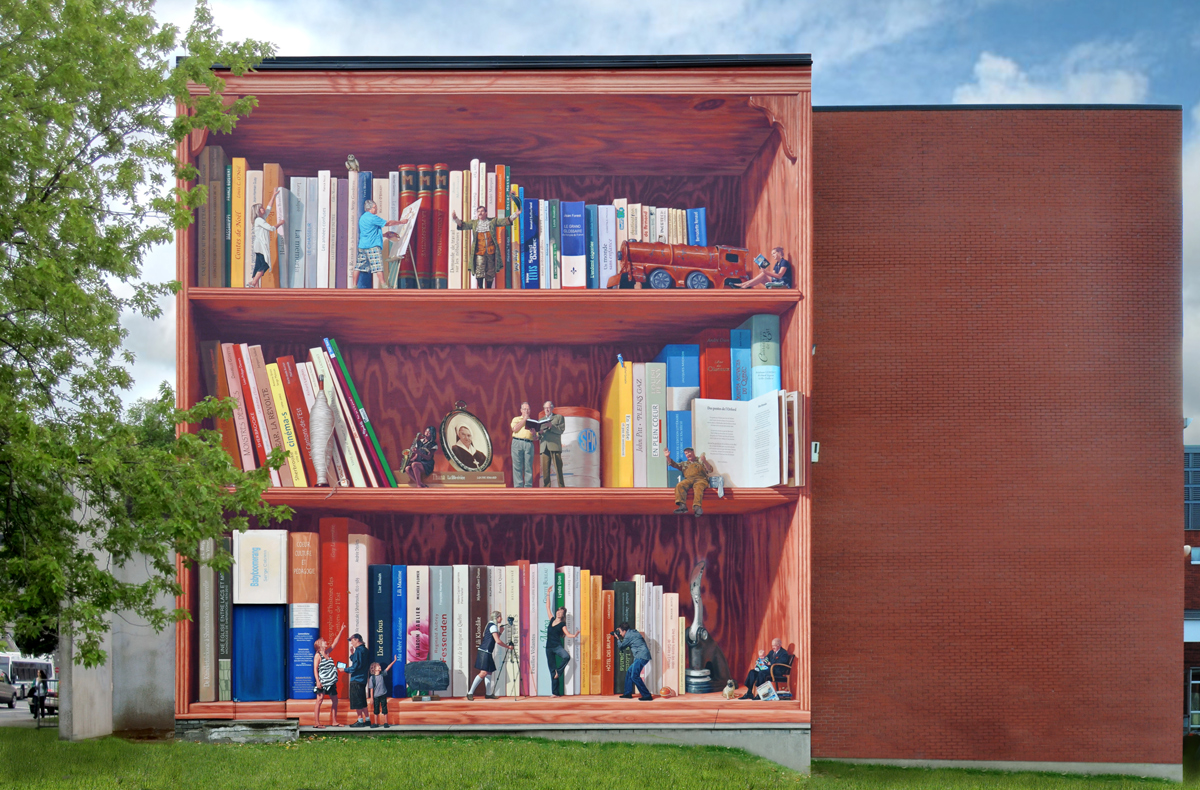 The mural Heart, Culture and Pedagogy harks back to the trompe-l’œil style of 17th century master painters such as Cornelis Norbertus Gijsbrechts (1630–1675) and Giuseppe Maria Crespi (1665–1747). The mural is a nod to the history of this neighbourhood vibrant with culture, literature and knowledge. Several of the objects in the mural evoke the local Lomas, Paton and Kayser factories.

The upper stories of the Collège Sacré-Cœur building have been replaced with the levels of a bookcase housing tiny characters, who are seen standing or sitting against a backdrop of giant books. The mural is an allegory of Sherbrooke as a cradle of knowledge, and stands as a metaphor of our literary world, representing more than 100 authors from the Eastern Townships. 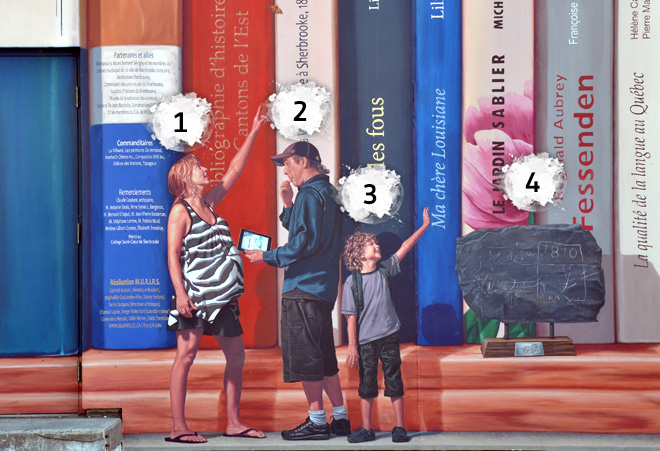 1
Romy St-Cyr
Special education worker for the Commission scolaire de la Région-de-Sherbrooke, or Sherbrooke school board. Became the proud mother of a beautiful little girl on September 2nd, 2011.
2
Mathieu Smith
The “dad with the iPad” is a street worker for the Coalition sherbrookoise pour le travail de rue.
3
Akiam Smith
A charming 6-year-old boy.
4
Petroglyph
In the fall of 1963, Jean-Marc and Philippe Forest came across an assemblage of petroglyphs in a rocky outcropping of the Saint-François River in Bromptonville.

After being retrieved from the river in 1965, the stones were brought to the Bromptonville town hall. In November of 1976, the City of Bromptonville turned the stones over to the former Sherbrooke Seminary Museum.

The glyphs are made up of various markings (initials, names, dates, anthropomorphic-zoomorphic motifs, etc.) and abstract symbols. The provenance of the petroglyphs is likely mixed, coming from both Native and other communities. They are thought to date from between 1740 and 1815, although this is only an estimate. Archaeologists believe that the petroglyphs were left behind by travellers passing through the area. 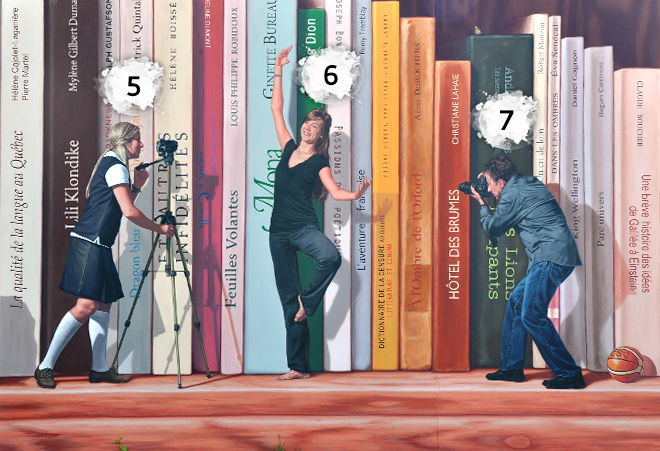 5
Charline Patry
Member of the photo club at the Collège du Sacré-Coeur. The recipient of the COOP award in secondary grade three, and head of the marketing committee for the student co-op. She was active in several different sports in addition to being an alpine skiing instructor at Mount Orford.
6
Émilie Lussier
Member of the Collège du Sacré-Coeur dance group. After-school dance instructor for secondary two students, involved in the student parliament and the student co-op. Won the 2011 FEEP award for her positive leadership.
7
Stéphane Lemire
A professional photographer. Lemire started off as a newspaper photographer before striking out on his own. His work ranges from photo reporting for magazines to fashion photography and studio portraits. He has taken part in numerous exhibits on a wide range of themes. He published five books between 2007 and 2010. 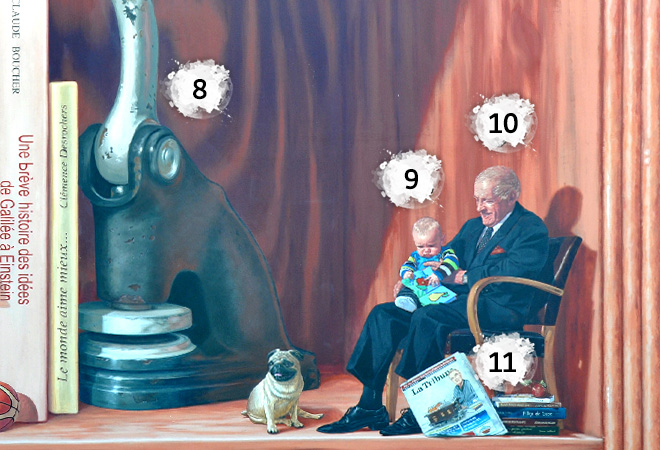 8
Institutional and Legal Sector
The district’s first courthouse and prison (1823);
The Plateau Marquette which became an institutional sector starting in 1825;
The modern-day courthouse (1987).
9
Adrien Couture
Five years old. The son of mural artist Raphaëlle Coulombe-Allie and photographer Patrick Couture.
10
Marcel Bergeron
A man known for his passion who worked as a securities advisor for many years. He did a number of sports and was an active sports coach. He has been retired for several years now.
11
La Tribune
The Eastern Townships’ only and greatest French-language daily newspaper, an unwavering supporter of Sherbrooke’s murals, is here represented by the Prix La Tribune de la Société d’histoire de Sherbrooke. In 2010, this award went to John Derek Booth, a specialist on the physical geography and history of the Eastern Townships and southern Quebec. Mr. Booth published many books and belonged to numerous scholarly associations and societies. 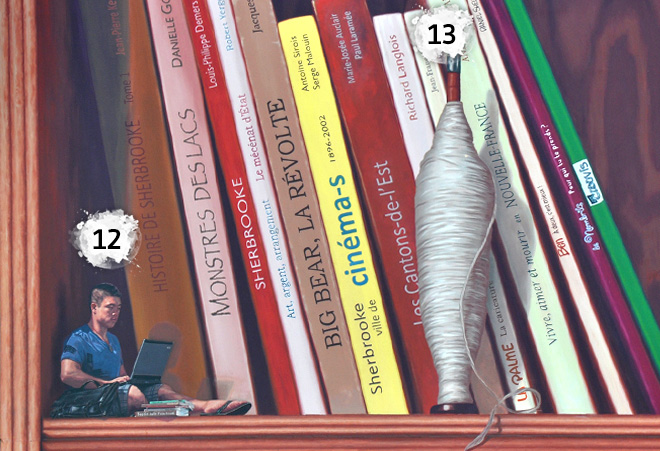 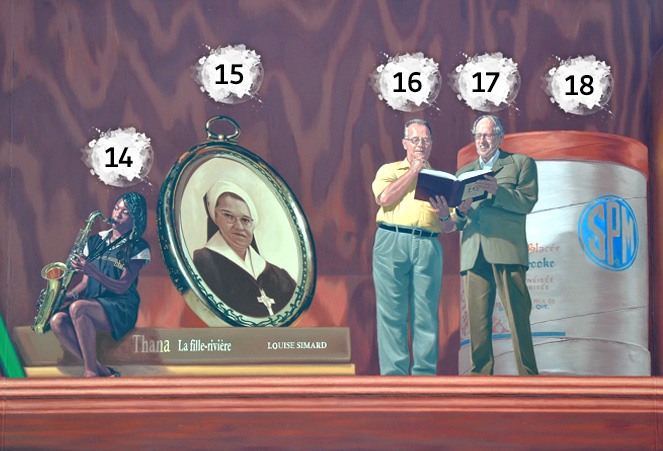 14
Gloria Mampuya
Member of the Collège du Sacré-Coeur concert band for three years; played an active part in its yearly concerts. Her honours included “Best Spirit” in basketball and “Newcomer of the Year” in athletics.
15
Sister Priscilla Lareau
A Daughter of Charity of the Sacred Heart of Jesus, Sister Priscilla Lareau founded the Collège du Sacré-Cœur in 1945 on Parc Street, in the eastern part of the city. She taught at the school for a number of years, before it was turned over to the government of Quebec and became the site of the modern-day CEGEP. Working with a parent group, she founded the Coopérative du Collège du Sacré-Coeur de la rue Belvédère Nord, which she led up until 1976. She went on to teach French at the school until June of 1990, after which she retired.
16
Claude Sirois
Professor and pastoral worker at the Mitchell and Du Phare schools, as well as the Louis-Saint-Laurent school in East Angus. Sirois also worked as a regional development officer in the leisure sector for the Conseil régional des loisirs de l’Estrie, and in the cultural sector for the Conseil de la culture de l’Estrie (CCE). The CCE awarded him a medal as Travailleur émérite du développement régional en culture de l’Estrie in 2010.
17
Antoine Sirois
Priest, teacher and professor emeritus at Université de Sherbrooke. Sirois held a doctorate in comparative literature from Université de Paris-Sorbonne, was a member of the Royal Society of Canada, and published a number of books. He was also the recipient of the Gabrielle-Roy Award (1987) and the La Tribune de la Société d’histoire de Sherbrooke award.
18
The Local Industrial Sector
The Sherbrooke Pure Milk Co. Ltd dairy farm, previously located at 209 Belvédère St. North (1930–1976). 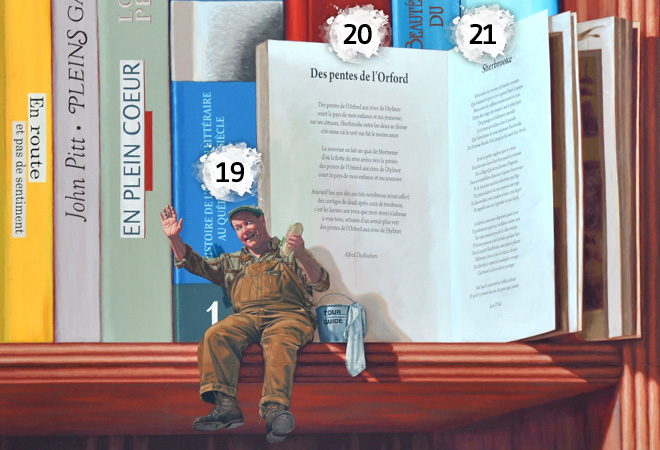 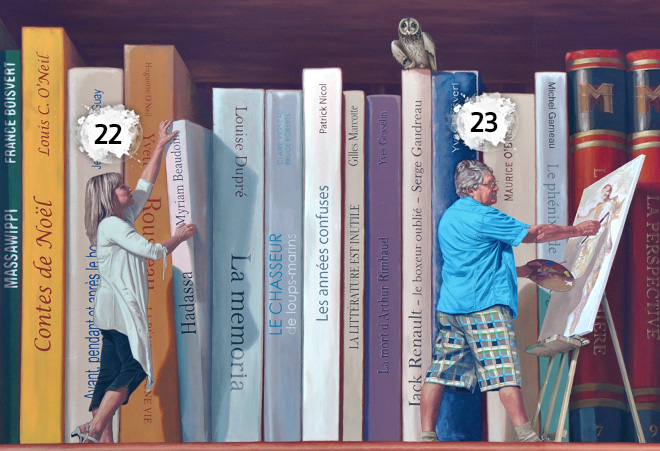 22
Dominique Perron
Science teacher and vice-principal at Collège du Sacré-Coeur. A lover of literature, travel and creative experiences that enable her to share her passion with her peers, students and friends.
23
Jocelyn Lussier
Born in St-Gérard and studied art in Quebec City. Lussier taught visual arts at the Montcalm and St-Francois schools for 37 years, sparking the creativity of many of our currently active artists. He retired in 1997.

24
Serge Christiaenssens
A native of Magog. Christiaenssens was a man of the theatre who rubbed shoulders with many actors including Gilles Latulippe. His numerous theatre and TV roles include the well-known “Bedeau Bronsard” in the series “Entre chien et loup.” He also made many appearances in advertising. Serge Christiaenssens passed away in January of 2010. 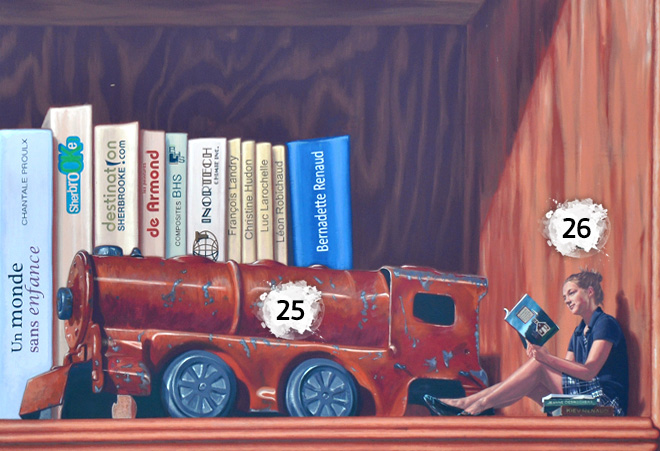 25
The Local Industrial Sector
C.P. Railways, which was located on Belvédère St. North (1890).
26
Sophianne Poulin-Houle
Elected class president every year of her studies at the Collège du Sacré-Cœur. Earned several COOP awards and was president of the board for the student cafe, as well as assistant basketball coach for secondary one students.