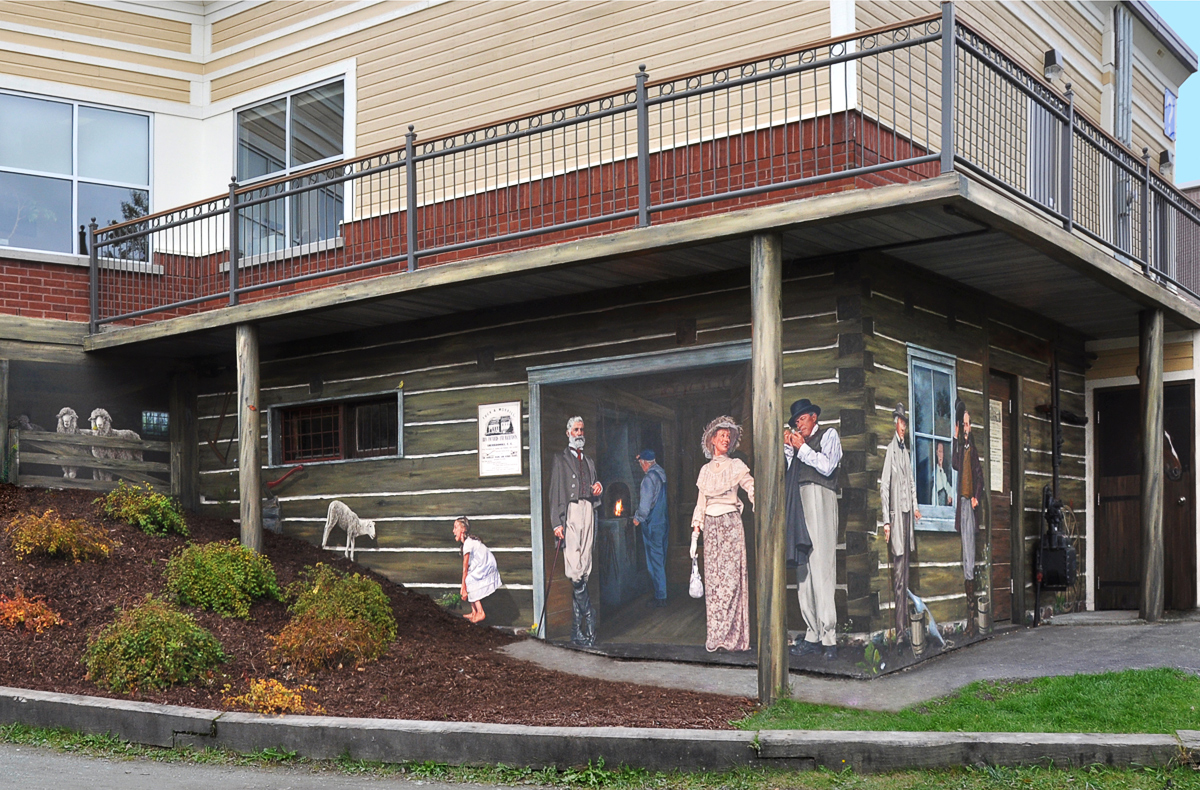 The Upper Mills is a mural that brings us back in time to the neighbourhood previously known as the “Upper Mills.” It is a tip of the hat to a few businesses that used to be located near the modern-day site of the city’s tourist information office. Stepping down the stairs leading to the Magog River gorge, we are transported to 1867. In this illustration of life in the era of the Upper Mills, several movers-and-shakers of the times have gathered together, and are probably discussing confederation. The mural makes it look as if the office’s upper floor was built on top of an old-time building that evolved over the years. The mural represents several factories from the neighbourhood. The 1927 construction of the Upper Mills Dam was the driving force behind the area’s industrial growth. The dam used hydraulic energy to power several local factories. 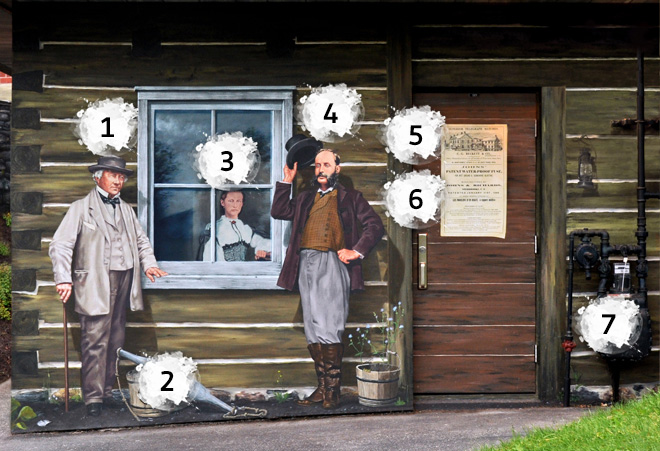 1
Major Henry Beckett
Born in 1799, deceased in 1870; came to Sherbrooke around 1820 after a long hike through tough terrain.

The soil where the Beckett family became established in 1824 was mainly composed of clay. This served as an opportunity for the major to open a quarry and make the region’s first bricks. For a number of years, his company brought him construction work for home construction and public building projects, including the first Sherbrooke prison at the corner of Montréal and Williams Streets in 1824, as well as the first buildings of Bishop’s University in Lennoxville in 1842. He was also hired to build bridges and stations.

Major Beckette played a key role in Sherbrooke’s development. When the city council was restructured in 1855, he was appointed road inspector for the northern neighbourhood.

Over the years, Major Beckett bought a number of lands in Sherbrooke, Orford Township, Ascot Township and even Richmond. The largest of these is located in Sherbrooke’s northern neighbourhood, previously called Orford Township. It is still well known today, as it has kept the name of Bois Beckett.
2
Bucket Factory 1848-1860
Rented by the BALC in 1851 from Joseph Bailey and Francis Wyatt, before the lease was assigned to William Brooks in 1854.
3
Cordélia Loodsa Ayer
The daughter-in-law of Major Beckett; married his third son Charles Goodhue Beckett in 1866. Charles owned part of his father’s lot in the northern part of the city, where he built his home, which still stands at 608 Prospect St.

Charles was a businessman and factory manager in Sherbrooke and abroad. Together with his brother, he opened a match factory by the Magog River, today on Richmond St., in 1867. In terms of staff numbers, it was Sherbrooke’s second largest factory after the Paton wool factory.
4
Alexandre Galt Lomas
Born in 1845, deceased in 1918. Partnered with his father, who had established a wool factory in Sherbrooke in 1842, to create the A. Lomas & Son Woollen Mills. Alexandre acted as assistant head of the factory for a number of years before taking over as president.

He was a member of the firefighting services, and, in 1879, became captain of the companies established by the fire protection and prevention department.

After running in the municipal elections in 1881, he was elected representative of the central neighbourhood. Two years later, on January 19th, 1883, he became mayor of Sherbrooke. One of his decisions was to build a bridge in the upper part of the city, on the Magog River (the Upper Magog Bridge), subsequently renamed the Wolf Bridge, then the H. C. Cabana Bridge.
5
Arms & Brown Foundry 1836-1860
Property of William Arms.
6
The Johns & Richard Headlamp Factory, 1865-1870
This company built patented waterproof helmets for the mining industry. Miners would put these lamps on their helmets so they could find their way around in the Sherbrooke region’s copper mines. It is the only enterprise of its kind in Canada. Burned down in 1870.
7
Factory 1828-1846
In 1828, merchant Charles Goodhue, with the support of merchant Tylor Moore and captain Guy Colclough, built a three-storey wooden building, simply called “The Factory,” in a still-wooded area at the gorge entrance.

8
Tuck & Morrill
The company Tuck & Morrill, Iron founders and machinists, makes an appearance on the poster.
9
George Gilman Bryant
Born in 1833, deceased in 1906 in his home on Portland St. Began as an employee of the Grand Trunk Railway, before hanging out his shingle as a building contractor. Among other things, he built Sherbrooke’s Methodist church and several stations on the main line of the Canadian Pacific. He founded a construction materials company, G.G. Bryant and Co., where he made doors, windows and all manner of woodwork. He even forayed into the construction of demountable homes for the Europeans settling in Western Canada.

He became mayor in 1889. During his term, he emphasized the importance of better showcasing Sherbrooke’s assets, including its virtually unlimited hydraulic power and a communication and rail system that directly connected the city to the rest of the country.
10
Brick Factory 1860-1870
Initially owned by Horace Taplin; for financial reasons, sold to Beckett & Jencks. It made over 3 million matches per year. 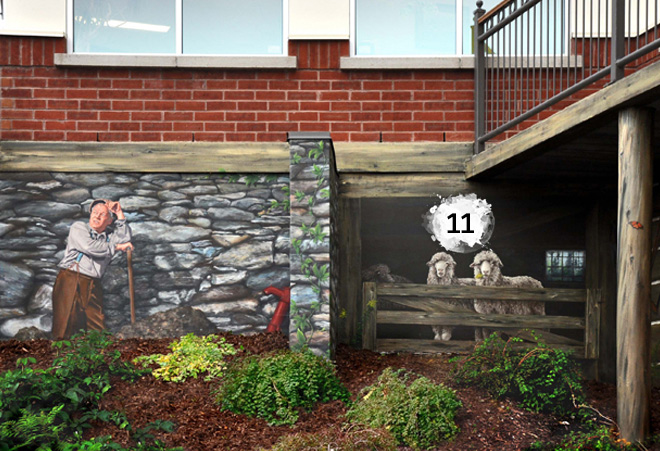 11
Foss Cotton Mill 866-1871
E.S. Foss opened a small carding mill that processed an annual 14 tons of wool, which were supplied by farmers. He later partnered with A.L. Grinford. 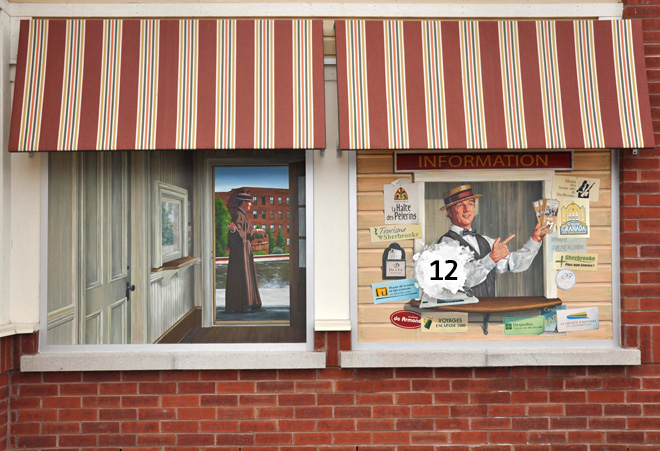